The July newsletter and calendar is now on the website. Due to work pressures, I am unable to continue as publisher and have handed over my templates to Nancy Pharo who has kindly put together this month’s issue. I made a lot of changes in the layout and design over the past six months, not all of them popular! But it was a fun project and I want to thank Gayle Crawford and Ann Murphy for their help and support. The Social Club is still seeking a permanent editor. Please call Sharon Cornelius if you are interested. 935-9505.

Thank you to many of you who wrote and called over the past year or so with kind words about the website and newsletter, and contributed photos and articles. I shall continue to manage this website and always welcome your suggestions.

This article was contributed by Dr Tim Derning, a Temelec resident. Thank you. Articles of interest to the community are welcome on this website. 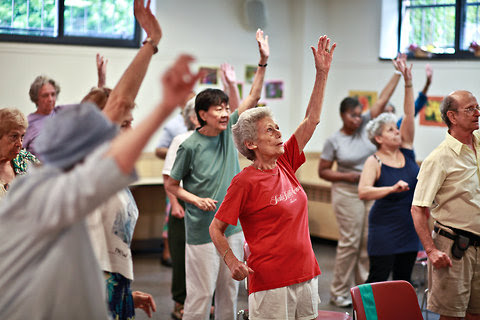 All of us have beliefs — many of them subconscious, dating back to childhood — about what it means to get older. Psychologists call these “age stereotypes.” And, it turns out, they can have an important effect on seniors’ health.

When stereotypes are negative — when seniors are convinced becoming old means becoming useless, helpless or devalued — they are less likely to seek preventive medical care and die earlier, and more likely to suffer memory loss and poor physical functioning, a growing body of research shows.

When stereotypes are positive — when older adults view age as a time of wisdom, self-realization and satisfaction — results point in the other direction, toward a higher level of functioning. The latest report, in The Journal of the American Medical Association, suggests that seniors with this positive bias are 44 percent more likely to fully recover from a bout of disability.

For people who care about and interact with older people, the message is clear: your attitude counts because it can activate or potentially modify these deeply held age stereotypes.

The researcher who has done more than anyone else to advance our understanding of this is Becca Levy, an associate professor of epidemiology and psychology at Yale University.

In the mid-1990s, she began a series of experiments with older people in laboratory settings. The idea was to expose them subliminally to negative or positive stereotypes by flashing words associated with aging on a computer screen too fast for them to process consciously. Then these seniors were asked to perform a task.

Those exposed to negative words such as “decrepit” had poorer handwriting, slower walking speeds, higher levels of cardiovascular stress and a greater willingness to reject hypothetical medical interventions that could prolong their lives. Those primed with positive words such as “wisdom” did much better.

The experiments involved external stimuli, however, and Dr. Levy was interested in peoples’ subjective experience of older age. For that, she turned to a database of adults age 50 and older in Oxford, Ohio, who were followed for a period of 23 years, from 1975 to 1998.

Many had filled out questionnaires at the start of the study designed to elicit stereotypes about aging. This involved soliciting a “yes” or “no” answer to a series of statements like “things keep getting worse as I get older,” or “as you get older, you get less useful.”

When Dr. Levy looked at 660 participants, she found that those with positive age stereotypes lived 7.5 years longer than those with negative stereotypes. The research was published in The Journal of Personal and Social Psychology in 2002.

What might account for this finding? In her paper, Dr. Levy speculated that people with positive age stereotypes have a stronger will to live, and that this might affect their ability to adapt to the rigors of older age. Also, people with negative age stereotypes may have a heightened cardiovascular response to stress, with attendant ill health effects.

In other research using this data set, Dr. Levy established that people with positive age stereotypes were more likely to eat a balanced diet, exercise, limit their alcohol consumption, stop smoking and get regular physical exams, and that they had a higher level of physical functioning over time. Results were controlled for other factors like illness, gender, race and socioeconomic status.

In these papers, Dr. Levy hypothesized that positive age stereotypes are associated with a greater sense of control and that this enhanced seniors’ sense of self efficacy — their ability to remain captains of their own ship, as it were.

Her new findings about the impact of age stereotypes on older adults’ recovery from disability is an extension of this body of work. In this case, Dr. Levy and her co-authors followed 598 adults age 70 and older in New Haven, Conn., from 1998 to 2008. Disability was defined as needing help with basic activities of daily living like bathing, dressing and walking, and its onset was typically precipitated by an illness or injury.

Again, seniors with positive age stereotypes were much more likely to have good results and recover fully.

Dr. Marie Bernard, a geriatrician who serves as deputy director of the National Institute on Aging, said she found the report “quite intriguing” and that it confirmed her clinical observations in more than 30 years of medical practice. But she cautioned that it is a small study that needs to be replicated.

“What we really need to understand is the mechanism,” she said. “Is it something that is malleable and, if so, could we help people live longer, healthier lives?”

Researchers don’t have an answer to that yet. But many believe that part of the answer has to lie in tackling ageism – which is pervasive in our youth-oriented culture — early on, from earliest childhood.

“Even young kids have negative associations; they tell you that older adults are sick, slow, forgetful, no good,” said Dana Kotter-Gruehn, a visiting assistant professor in the department of psychology and neuroscience at Duke University.

Also generations need to be brought together so that “people can experience what it means to be an older person” and stereotypes can be dispelled, Dr. Kotter-Gruehn said. This has been shown to help change people’s stereotypes about race and homosexuality, she noted.

Closer to home, all of us who interact with older people can “think about how to reinforce the more positive aspects of aging,” Dr. Levy said.

“If all of us became a little more aware of the implications of our communications” — the tone of voice we use with seniors, the attitude we adopt, the use of loaded phrases or expressions, the extent to which we give older adults our full, undivided attention — “that would help quite a lot.”

Temelec’s TRIP TO MARE ISLAND was on June 26. A good time was had by all!

Mare Island was opened in 1884 to build military ships; over 500 were built there. Most of it is reclaimed land, and that’s fascinating in itself.   It was decommissioned in 1996 and is now a historical park for all to visit and see an amazing assortment of buildings, art, informational writings, photos, and more.  Those of us there all agreed that when you go once you want to go back and spend more time there.
Our excellent bus driver Casey got us there and our super tour guide, Lou, met us on arrival, and off we went on our tour.
We spent most of our time at three spots:
* St. Peter’s Chapel, built in 1901, is built mainly of redwood and is not only the first military chapel built in America, it is renowned for its beautiful Tiffany designed stained glass windows.  Tiffany said he did not want to paint on glass, he wanted to paint with glass.  The over twenty windows are amazingly brilliant and beautiful as they depict St. Gabriel, St. Peter, Jesus Christ and more.
* The Admiral’s Mansion is one of the largest (over 10,000 square feet) of the colonial revival mansions on the island.  The spaciousness, the woodwork, the design of the rooms all are wonderful.
* The Artifact Museum has so much to read, so much to see, so much to learn, and so much to enjoy.  We drove all around Mare Island with Lou, our guide, telling us what was what, when built, who lived and worked here, fun trivia, and how the Island is now becoming not only a commercial area, but a living area with homes and apartments being built or refurbished and offered for sale or rent.
If you want more information about tours and costs their website is http://www.mareislandhpf.org.
Submitted by Nancy Pharo

Thanks to Cary Boulet, Our Librarian

Tuesdays are now even better! (Not an ad, just something worth sharing.) Find a list of other senior discounts at https://temelec.org/senior-discounts

As of today, the Temelec HOA documents are no longer on the temelec.org website. If you need any documents, please contact Julie in the office at 996-1076, or send an email to temelecHOA@vom.com.

Just a reminder that the website is maintained by me for the benefit of the community and is not an official HOA site. Everyone is welcome to contribute stories, photos and articles. We now have over 100 subscribers!

Beginning this month, the HOA Board is distributing its own monthly printed newsletter and will continue to improve the ways in which it keeps residents directly informed. Please attend the HOA meetings on the second Monday of each month to learn more.

Have a great weekend!

Our neighbor, Henry Ratz, has contributed some beautiful photos of the flowers around Temelec Hall. Click here to see a lovely slideshow. Thanks Henry!

Now that the weather is gorgeous, we are holding the Thursday Morning qigong classes outside at 10am in front of Temelec Hall. Please join us to rejuvenate your mind and body in a gentle way. All are welcome!

Thanks to Nancy Pharo for the photo. See more by clicking here.

One of the benefits of subscribing with your email to the Temelec website is that you get an early look at next month’s newsletter and calendar before they come back from the printer. Check them out now by clicking:

We have 101 subscribers as of today. Finally made it to a century!